Home / Blog / Flexfurn at the Olympic Games
one year ago

Flexfurn at the Olympic Games

Flexfurn has achieved top performances with Conic at the Olympic Games in London.

A year ago we had our eyes glued to the screen excitedly watching the World Cup football and the Winter Olympics. Now that these are over, we think back with pride to the 2012 Summer Olympics.
The opening ceremony of the London Olympics - literally and figuratively - created history. The halls and fields were very fine, and the countless star athletes broke - how could it be otherwise - quite a few records.
Behind the scenes there was also a lot to do in the athletes’ village (or Olympic village), and we at Flexfurn are happy to look back on that.
We were asked to furnish a bar, restaurant and nightclub in one.

Flexfurn at the London Olympics: exotic event venue for VIPs

“Could you furnish a pop-up event venue in the heart of London for about 350 people?” The organisers of the Olympic village came to us with that question, and of course we agreed enthusiastically. We were happy to accept that the result had to look exotic and VIP-worthy. The target audience? Olympic athletes, but also their entourage and their supporters. We had to set up the tropical looking bar/restaurant/nightclub in such a manner that they would feel invited to have a nice chat with each other and in the meantime to enjoy a snack and a drink. A dance floor was also on the list of minimum requirements, with mood lighting playing an important role.

A nice idea, such an exotic nightclub on the edge of the Olympic Games ... and London wouldn’t be London without the typical English rainy weather. In July and August! And that can be really hard on the terrace furniture.

Luckily, with our Conic collection, we immediately found a solution to the problem. This exclusive collection of design furniture includes sturdy party tables and seats that can be used both indoors and outdoors. We therefore used Conic as terrace furniture, but also inside and in the VIP lounge.

Conic’s streamlined look and black & white version fitted in perfectly with the exotic VIP image that the London Olympic organisers had in mind.

Did you know that… 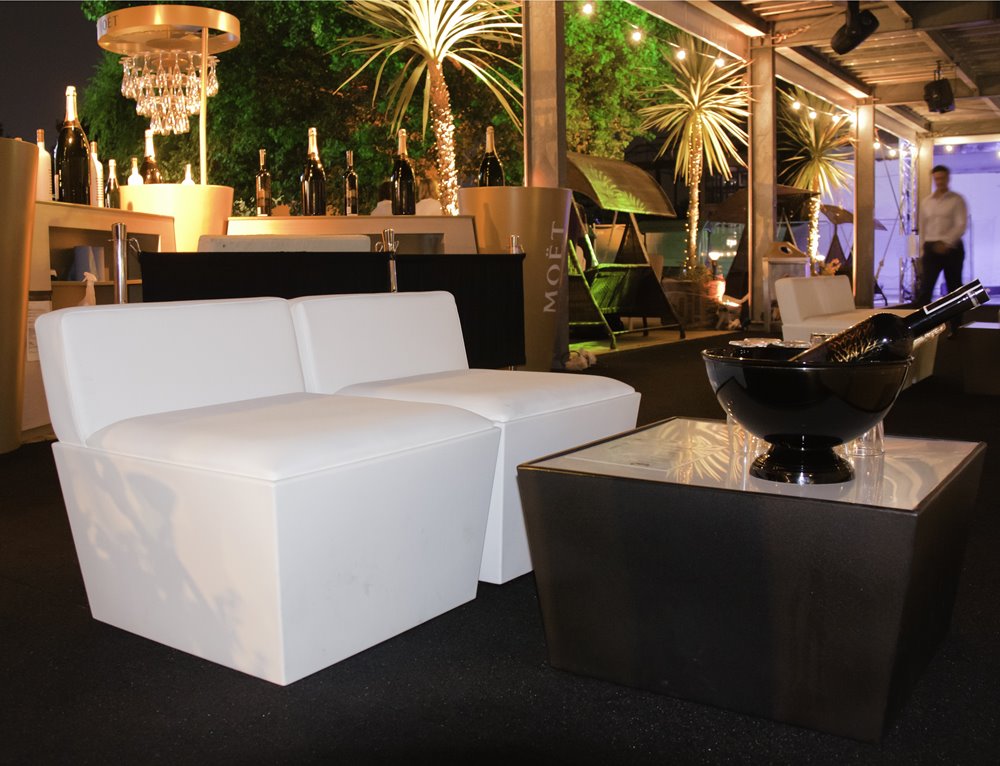 No VAT number? No problem!
Not a company and interested in our products? Find a dealer in your area.